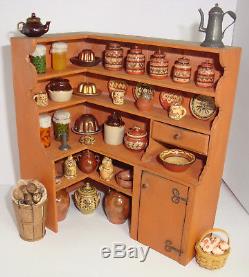 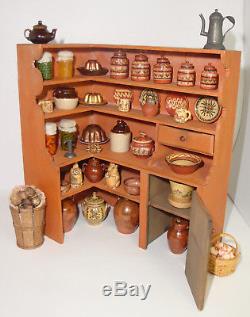 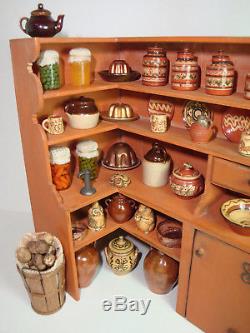 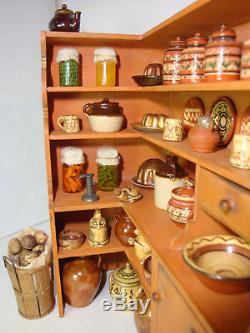 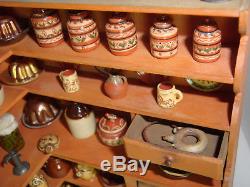 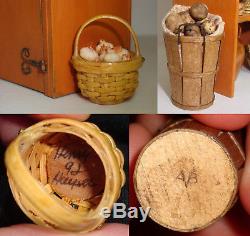 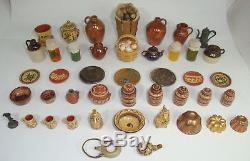 ITEM- 44pcs in 1983 Jim Holmes Pantry Cupboard 29 Pieces of Jane Graber Pottery, 2 of Hairy Potter + more Color is most accurate in last photo & basket closeup. DESCRIPTION- Offered here is a gorgeous Artisan collection featuring the work of 9 artisans & more pieces. Most of the pottery is made by Jane Graber & includes both redware painted pieces, sgraffito pieces, sculpted pieces, & wood-fired pieces. A large 5 piece canister set, four plates, a bowl, a pot with a bird on top, three mugs, a two handled pot, a planter, one medium-sized & two large mottled redware jugs, a large Moravian lidded jar & three figural bottles owl, turtle, & squirrel with nut (all with corks I aged), & in the drawer (7th photo), a ring bottle with a leather strap I made from 100 year old leather. There are two pieces of porcelain with redware glazes by Craig Roberts (the Hairy Pottery), a medium size bowl & a similar small bowl. There is one piece of pottery by English potter Duncan White, a small redware jug or pitcher with green glaze at the top.

There is a vintage brown teapot by Avon Miniatures (retired), four jars of vegetables/jam by Sharon Harbison (covers made & aged by me), two pieces of pewter made & aged by Michelle Hapner : a Pennsylvania Coffee Pot & small hogscraper candle holder, & three vintage bundt cake molds (2 are copper & have nice patina), and a fruit crate basket by Crystal Monson, with the mark "AB" on the bottom from where this line of baskets was called Apple Valley Baskets, but the potatoes are probably Faith Rogers (Precious Little Things) as they come from a vintage 80's collection. Lastly is a very nice diminutive Nantucket basket by Henry Hayser in 1992 filled with garlic, 1 wide.

CUPBOARD & MAKER- The cupboard was made by Cindy & Jim Holmes in 1983 is believed to be a one-of-a-kind L-shaped corner country cupboard & is among my favorite pieces I've ever owned. Jim made the cupboard, his wife painted it but I'm not sure which of them aged it or if they did it together but the distressing is the really amazing thing. This piece was intentionally aged in many ways. Jim studied a book detailing the work of a famed antique faker & Rhode Island sculptor, Armand LaMontagne who in the 1960's produced a notorious fake Pilgirm-era Brewster Chair for fun to snub the experts & gave it away strategically knowing it would be "found". It would likely never have been found out, had he not admitted to it years later to the Providence Journal.

At that point, x-rays were taken & only the shape of the drill hole tips revealed modern manufacture. Had he have altered the hole shapes or used a period spoon drill, they wouldn't have believed it even after his admission. He had used many methods to fake it including using green wood so it would bow afterwards to soaking it in salt water to simulate aging.

He went on to damage the piece intentionally from cracks to burns to stains to stray paint to intentional wear to whittling on a arm, all things that would've likely happened to a chair in over 300 years. Jim worked from photos & descriptions in that book to create his aged pieces which are among the best distressed & aged dollhouse miniatures ever made. His work is highly under-appreciated based on the research, time, & effort involved. Furthermore, Jim made his own hinges & hardware including these amazing southern Pennsylvania ram's horn hinges, my favorite hinges I've ever seen on a DH piece. Cindy achieved a remarkable aged pumpkin color on this that is so good I just can't get it in photos.

The last photo showing the bottom is the closest to the correct color of the cupboard. This piece has stains on the back edges of the front, intentional spacing in the back boards, an aged & stained back & top shelf just like you'd see on an early cupboard (we were antique dealers for 20 years).

The different color green painted inside the cupboard door was a nice touch often seen on early painted pieces. Believe me when I say it is a fabulous color you will love in person, but it's very difficult to photograph the color you see in person, closest is the last photo of the bottom with the artist's signature. The color you see under a bright light is what you see in the basket closeup. I can't get a photo to show the color you see in normal light. It measures 5 & 1/2" tall X 5 & 3/16 long X 2 & 15/16" wide.

Jim & Cindy Holmes made some amazing pieces, which I have yet to find duplicates of. Maybe I should've let her. I was sad to see it go. Apparently, though I haven't seen it, I was told by someone very knowledgeable that their greatest creation was an aged barn antique shop made for Sarah Salisbury. If anyone has photos of it or knows where it could be seen, I'd love to know.

REDWARE MAKER- Jane Graber, is a member of the IMGA (International Guild of Miniature Artisans), has been making miniature replicas of 18th- and 19th-century American salt-glaze stoneware for more than 35 years, hand-throwing each piece on a potter's wheel, then painting and signing her work. She is internationally recognized for her craft, has been featured on the cover of Ceramics Monthly, and regularly does solo and group shows in the U. Her work is extraordinary; she is widely recognized as the best living miniaturist potter & without question is definitely the best in terms of stoneware & redware. In the later-1980s, Jane began hand-throwing replicas of early American sgraffito redware, which is quite popular among her collectors and others who love Americana. Her pieces have great potential for increasing in value & I completely adore them. Jane Graber is the best maker of miniature folk pottery working today & very likely the best ever. POTTERY NOTE- All four of the undecorated, mottled redware pieces have the prized, green glaze which only happens accidentally only rarely when oxides in the mottled glaze don't burn out in the kiln leaving some or a lot of green mottled color added. This is a very desirable glaze color & I've seen people pay much higher prices for it. It does make them more beautiful & unique & I bought all that were that way. I always try to note condition to the point of being anal so there are no surprises. The pottery was all bought newly & there is no visible damage. It's important to not that the cupboard was intentionally distressed & aged. However, when I bought it there were a couple of scratches on the left edge of the cupboard which were professionally repaired & color matched so that now only some faint lines appear in person (see left of the last photo but they are more visible in flash photos than in person where you don't even notice them).

The small glass jars by Sharon Harbison are sadly crooked jars but with just a little sticky tack in the correct spot, they stand straight. I only realized this after I got home from the show where my wife bought them. The Nantucket basket has quite a bit of glue holding the handle in place but it appears completely original to me as if the artist had a purpose in doing it, just be aware. Lastly, the leather strap I made for the ring bottle is made of very old & very thin leather which isn't all that strong, so don't count on that, just consider it a fragile bonus that looks good.

Color is most accurate in last photo of bottom with signature & basket closeup. ABOUT US- We are Chris & Holly Wood of Scottsville, KY & we sell dollhouse miniatures at shows (in Chicago & Philadelphia & maybe more soon) & we sell under born-again, scraphooked, & sometimes if we get offered a cheap promotion under oddsandns & givememineinabottle.

What you see is what you will get. If you read & look thoroughly, you will get what you expect & hopefully you will be pleased. The item "44pcs in 1983 Jim Holmes Pantry Cupboard 29 Jane Graber Pottery 2 Hairy Potter +" is in sale since Tuesday, February 13, 2018.

This item is in the category "Dolls & Bears\Dollhouse Miniatures\Artist Offerings". The seller is "scraphooked" and is located in Scottsville, Kentucky.