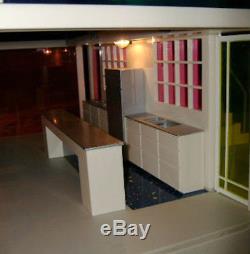 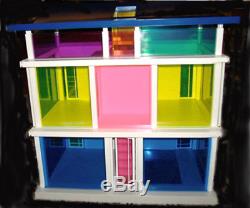 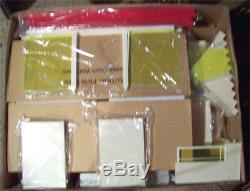 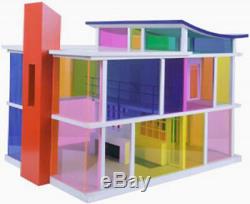 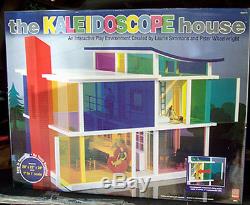 The Kaleidoscope House is no longer in production and very rare and difficult to find. After that we do not expect to have others. We will provide a very good price for accessories to the buyers of our doll houses. From Bozart Toys, The Award Winning Company That Commissions Museum Quality Artists to Create Toys. The Kaleidoscope House was conceived and designed by artist Laurie Simmons and architect Peter Wheelwright. Simmons, who is known for dollhouse imagery in her photographic work, has exhibited extensively in one-person and group exhibitions both nationally and internationally.

The Kaleidoscope House was designed as an interactive creative play environment for 6 year olds and above is now a highly prized collectors piece. This 1:12 scale contemporary architectural dollhouse home with sliding interchangeable color clear sturdy plastic walls invites children and adults alike to fill it with an exciting designer accessory line of modern furniture, artwork and figures. As the interchangeable exterior walls of the dollhouse slide open and overlap one another, their colors change in hue and value.

This house has a great room with a fireplace, a kitchen and kitchen island and room for family room furniture. There is a workable light above the kitchen area. The front door opens to the foyer and stairs leading up to the balcony that overlooks the great room. There are two bedrooms, each with a ladder that leads to a loft, a bathroom, dining room, and living room.

There are doors that open, sliding doors and panels that overlap. The photos below are of an assembled Kaleidoscope house identical to the one offered here. The one offered here has never been assembled and remains as originally. The dollhouse has been featured in the New York Times, House and Garden and many other design magazines. The Kaleidoscope House was voted one of the toys of the year by Child Magazine and Top Ten 2000 by Lisa Leibman in Artforum.

It appeared in numerous publications including The New York Times , The Washington Post, Architecture, and House and Garden. The house is included in an exhibition at The London Design Museum. Furniture and accessories for the Kaleidoscope house were designed by respected contemporary designers including Dakota Jackson, Karim Rashid, Ron Arad and Keiser/Newman: paintings, photographs, and sculpture by Peter Halley, Carroll Dunham, Laurie Simmons, Cindy Sherman and Mel Kenduck. Accessories shown are not included.

Post Office Priority, insured with tracking. Check out my other items. Be sure to add me to your favorites list. The item "Kaleidoscope Doll House Bozart Dollhouse New in Box!

Designer Modern" is in sale since Saturday, June 2, 2018. This item is in the category "Dolls & Bears\Dollhouse Miniatures\Doll Houses". The seller is "amberglow" and is located in Quincy, Florida.